Upon inspection, the Dawson’s Home Pest Control Technician knew just by looking at them that they were European Wasps. They were entering through a small gap that ran along the window sill of the window on the staircase and the reason for the constant wasps inside this man’s beautiful Chelsea Heights home was because they had set up their own home under the stairs!

Once the technician was in his protective gear – coveralls, balaclava, elbow-length gloves and face mask, he was able to treat the wasps with little to no danger to himself using a professional-grade insecticide.

A few minutes later he was able to remove the European Wasp nest and treat the area as well as the window with a deterrent to keep any wasps that belonged to the nest but were away at the time, out of the house. Then finally, the small gap was sealed so that no more wasps could enter. 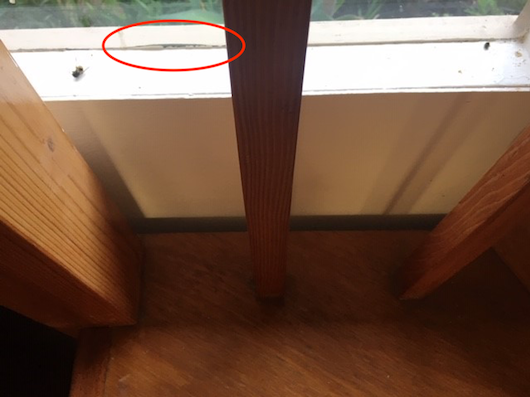 Small gap in window where wasps were entering 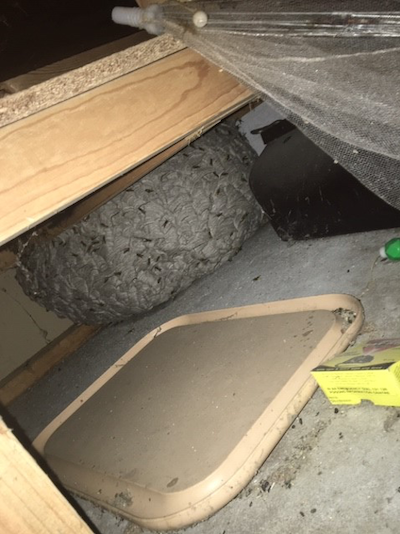 Wasp nest in back corner of stair

As well as being dangerous to humans and animals, wasps can cause serious damage to a home. Thankfully this gentleman contacted Dawson’s Australia before his Chelsea Heights home was overrun with wasps and before anyone was stung.

European Wasp nests are made from chewed wood fibre and can be found in ceilings, wall cavities, logs, tree trunks and underground, normally only visible by a small entrance hole. Wasps are most active in spring and summer, but thanks to the Australian climate, European Wasps are active all year round.

To help avoid sharing your home with wasps make sure all bins including compost have lids that are well fitted and refrain from eating or leaving food and drinks outside.

Remember: Never try to eradicate a wasp nest yourself, Dawson’s Australia’s Pest Control Technicians are highly trained and have protective equipment for dealing with such a dangerous pest.

If you think you have a wasp infestation call Dawson’s Pest Control in Melbourne today on (03) 9222 2266 or fill in our contact form online to organise for one of our pest control technician to come out today.

Winter is Coming and so are the Rodents!

A gentleman from Chelsea Heights contacted Dawson’s Australia complaining of wasps inside his home. Not just the odd one or two, but a considerable amount and no matter what he… Read more