Cockroaches are one of the most common pests in Melbourne homes and businesses. They favour conditions similar to those that humans create, which is why effective cockroach control and cockroach management by professional Pest Control in Melbourne is so important. Cockroaches can contaminate food, utensils and preparation areas with droppings, cast skins, egg sacs, regurgitation marks and foul odours.

The Most Common Cockroach Species Encountered in Melbourne 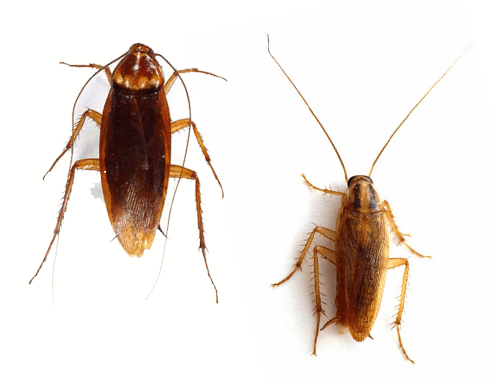 German cockroaches can be a major problem in commercial kitchens, restaurants, pubs, cafes and in our homes as they are prolific breeders, and can live in refrigerators and in ovens as well as the smallest cracks and crevices. They are a relatively small cockroach, ranging from nymphs (young insects) the size of a pinhead to adults up to 15–25 mm long.

Australian, American and to a lesser degree the smoky brown cockroaches can be found throughout buildings. They are much larger than the German cockroach, up to 30–55 mm, and they have the ability to fly at night.

Cockroaches typically are nocturnal, if you’ve seen one, you probably haven’t seen them all. The few cockroaches you see by day means they were likely forced out by overcrowding; a possible sign of severe infestation.

Cockroaches have been implicated in the spread of over 30 diseases such as Salmonella, which is a major cause of food poisoning.

How to Tell If You Have a Cockroach Infestation

Cockroaches are extremely hardy creatures and adapt well to residential or commercial properties.

They are often found in dark, warm places with good humidity which includes:

Call us today on (03) 9222 2266 or Request a Call Back and speak with one of our customer service team members to answer any questions and arrange a treatment.

Your home is your most important asset – keep it protected! With over 60 years of experience in the industry, you’re in safe hands with Dawson’s Australia.

All treatments are carried out by professional, licensed pest services technicians. We always adhere to Australian standards and use only the highest quality products to ensure your pest problem is treated thoroughly.

Our professional pest technicians are trained not only to treat the pest problem but also to look at the root cause. They will take the time to understand your concerns and provide feedback and recommendations on how to minimise pests in and around the property.

All of our professionally trained and experienced technicians take the utmost care when carrying out treatment at your home or business and will work with your family to accommodate any needs.

We Offer Same Day Service to All Suburbs for All Pests

Contact us now on (03) 9222 2266 or Request a Call Back to book your same day service or to discuss a range of solutions suitable to protect your home and family.